Kumari is helping startups, luxury brands, media houses, fashion brands, retail companies and more to expand their presence to international marketplaces using a fresh aesthetic that connects to diverse audiences. Kumari is a versatile individual who started as a brand, but is now a conglomerate.

Her game changing skill set coupled with her experience in the entertainment industries, make her work instantly identifiable to fans around the world. Her work has been replicated throughout the global dance industry. Kumari always creates a sensation that leads to social change and corporate social responsibility.

Kumari is an international dance icon, dance trailblazer, public figure, content producer, motivational speaker and LGBTQ+ activist. Her game changing skill set coupled with her experience in the entertainment industries, make her work instantly identifiable to fans around the world.

She is helping startups, luxury brands, media houses, fashion brands, retail companies and more to expand their presence to international marketplaces using a fresh aesthetic that connects to diverse audiences. Kumari is a versatile individual who started as a brand, but is now a conglomerate.

Whether it is a fashion show, mobile application or a media promotion, she makes sure that it has the Kumari essence. Kumari creates a sensation that leads to social change and corporate social responsibility. Follow her on social media or drop her an email to talk more about your business/career goals or just to simply explore a kick ass human being.

Kumari started dancing when she was two years old. She went on to study 17 dance languages with the intention of being a lifelong student of dance.   Kumari became dedicated to the historical preservation and cultural evolution of many dance styles.

As an experienced Dance Educator, Kumari has mentored dance communities in over 34 countries since 2006.  Kumari uses dance as a powerful tool to teach and educate youth, all over the world, how to love and accept themselves as they are.  She taught Hip Hop, House, Waacking, Vogue, Afro/Dancehall plus her signature creations Bollywaack and Frankie Douglas Style. Kumari was the first to introduce Waacking and develop teachers in  Denmark, London, Poland, South Africa, Los Angeles and Portland, Oregon to name a few. In South Africa, 2007, Kumari was the first choreographer to introduce the dance styles of Waacking, Vogue and House.  She mentored and trained South African students through her Dance For Peace community project launching the next generations of successful dancers, choreographers and studio owners; they are now very successful in the global entertainment industry.  Kumari eventually gravitated to the dance style of Waacking for it’s freedom, femininity and individuality.

Kumari Suraj is a successful  YouTuber which is reflected in her growing fan base and video views. As one of the first to upload Waacking choreography videos to YouTube in 2006|07, Kumari gained international recognition for her creative innovations.  Whether she choreographs energetic masterclasses, stage productions, an artist’s music video or one of her YouTube vlogs there is no denying Kumari’s distinct dance style.

Kumari made a splash into American households, 2011, as the first Waacking choreographer on Fox’s “So You Think You Can Dance”, introducing the style and movement’s vocabulary. Now, Waacking is seen in social media, countless stage shows, concerts, international dance competitions, commercials, music videos and more, with much of the style’s visibility tracing back to Kumari’s tireless promotion of the dance since the early 2000s.  Kumari is a frequent guest judge for dance battles and competitions.

In 2017, on national television in India, Kumari and the House of Suraj were the first choreographer and team to feature Vogue, Waacking and Kumari’s dance creation Bollywaack.  Week after week they performed original productions for an audience of 1 billion viewers in 150 countries, while competing on India’s #1 hit dance reality series, Dance Plus 3.  House of Suraj wowed their way to the semi finals.  Kumari has choreographed and performed her Bollywaack style for the biggest artists in the Bollywood industry including; Shah Rhuk Khan, Remo Dsouza, Jacqueline Fernandez, Govinda, Farah Khan, Prabu Deva, Kangana Ranaut and more.  Bollywaack has become a new trend in the commercial industry, bollywood music videos and dance institutions worldwide.

With ambitions to expand her brand, Kumari Suraj is currently enrolled at the Fashion Institute of Design and Merchandising (FIDM) in Los Angeles.  Kumari is focusing her efforts on launching an environmentally sustainable athleisure clothing line.  Fashion is the #2 global polluting industry. Kumari’ triple bottom line; “Planet, People, Profit” mentality compels her unstoppable passion for creating beautiful fashion, healing the earth and taking care of the people her fashion company employs.

Kumari Suraj has a forte for trendsetting style. She has taken her trendsetting style and industry experience to style and design fashion for artists in television, music videos and live stage performances. Kumari’s creations have always been beautifully linked and replicated by other industry tastemakers.

Curvy Model  Kumari is ethnically ambiguous with a voluptuous figure.  At the age of 16, Kumari’s experience as a plus size model for Saks Fifth Avenue made her determined to have better representation of mixed race plus size people. Kumari has modeled for brands like The Tenth Magazine in NYC, Ed Hardy, Adidas Originals and more. Kumari is featured as a plus size dance instructor for the fat positive fitness platform, JOYN.  Being proactive and vocal on social media about her luscious size 16 body, Kumari has become a body positive role model for larger men and women all over the world.

Brands consult Kumari for her understanding of international markets and visual communication enabling them to expand into a global economy.  Kumari is very hands-on with every production.  As a consultant, she is able to bring the imagination of each client to life while assembling the right cast and crew for the project.

As an activist, Kumari  has raised voice and action over Environmental Issues, Cultural / Ethnic /Gender Equality, Women Empowerment and LGBTQ+ concerns.  For the past 17 years Kumari has used dance as a powerful teaching tool to educate youth to love and accept themselves as they are. Bridging gaps of misunderstanding through her art of storytelling and curated events.  Kumari enjoys speaking engagements on topics of Intersecting Identities, LGBTQ+

In 2010, Kumari created the world’s first queer dance festival, LA’s International Waak/Punk/Pose Festival “Waackfest”. Waackfest was created as a “safe space” for young LGBTQ+ and Allied artists to express themselves through fashion, music and art. Waackfest has curated successful events in India, Los Angeles, The Netherlands, The UK, Poland and Portland Oregon.

This 3 day fesival highlights discussion panels with community leaders, dance workshops with pioneers, competitions and performances creating awareness to sensitive issues like HIV-AIDS, gender discrimination and breaking social barriers etc. These events are for people of any age, caste, sect, and economic background in the hope of cultivating conscious human beings. In its tenth year of community service, Waackfest, is now a registered non-profit under Dance for Peace: One Step At A Time.

“This style [Bollywaack] you’ve invented is absolutely brilliant. Really one of the best pieces of live stage performance I’ve seen on a show or otherwise.” [Dance Plus 3 Tree Act]

“Kumari, you are legendary and it’s so amazing what you’ve done and brought to dance!”

“My experience working with Kumari was so awesome! She’s a beast in several styles. Not just with polished, seasoned dance skills but, with the knowledge of each dance style. From the jump Kumari made sure I had a private session with her first to soak in the history, origin, meanings, technique of each style, research links and homework which speaks volumes about respecting the craft of any art form first & foremost.”

“While training in Los Angeles, I was scouted by Kumari Suraj to train under her in a style known as Waacking. I had no idea how much of an impact this particular style would expand my vocabulary as a professional dancer. Not only did it help me find my femininity in dance but, I gained a life log sister in the process. Whenever there is an opportunity to freestyle in a job of audition I would showcase my Waacking. I’ve been able to perform Waacking for Toni Braxton and Estelle.” 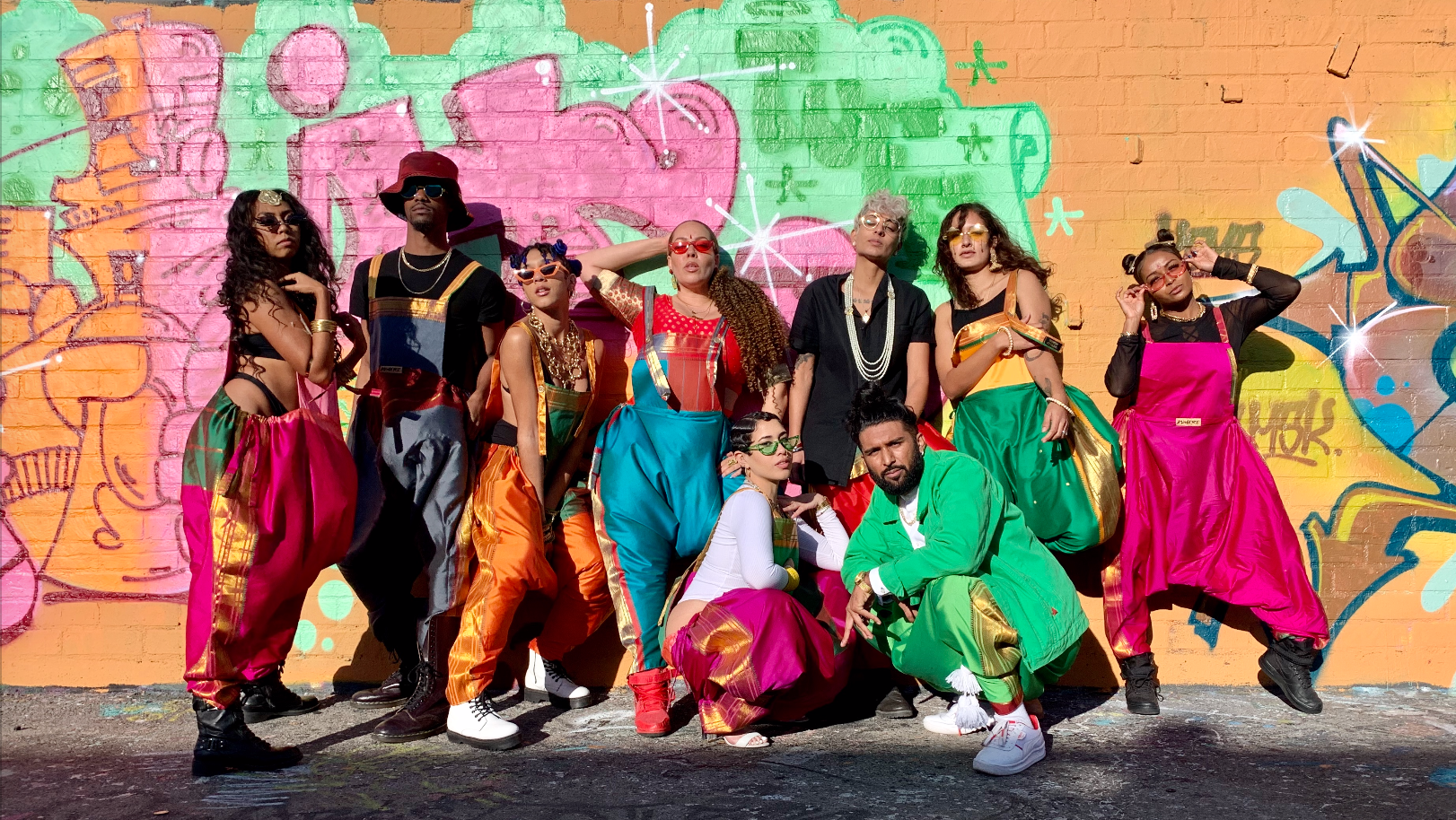 BECOME A TRENDSETTERTAKE 20% OFF TODAY

Use promo code: TRENDSETTER in store

Join our fabulous community for monthly updates on fashion, music, dance  and other feel good content.